Wallabies back Mike Harris kicked a penalty from close to the sideline after full-time to steal a 25-23 victory from Wales in a heart-stopping affair in their Test in Melbourne.


Wales looked to have secured their first win on Australian soil in 43 years but a penalty for collapsing a maul in the final seconds gave replacement Harris the chance for glory.

The visitors showed their trademark fighting spirit at Etihad Stadium but the loss meant a series victory for Australia, who took out the first Test in Brisbane last week.

The lead changed hands nine times as the match went down to the wire.

New dad Berrick Barnes looked to inspire the Wallabies to wrap up the series after making it back to Melbourne just a few hours before kick-off and he was named man of the match.

The five-eighth dashed home to Sydney late on Friday to be at the birth of his first child - a son, Archie.

Barnes set up the Wallabies' only try of the match just before half-time when he threw a superb dummy before offloading to a rampaging Rob Horne.
He also added 17 points through five penalties from six attempts and a conversion before being replaced by Harris with seven minutes remaining.

Wallabies rookie Cooper Vuna, playing only his second Test, made a costly blunder when he took out Welsh fullback Leigh Halfpenny in the air and was yellow-carded.

Halfpenny kicked that penalty which put his side ahead at the 60th minute 20-19.

Wales then piled the pressure on the home side and, after eight phases hammering the Wallabies defence, winger George North found a hole to plant the ball across the line in the third minute of the match.

Their second try came two minutes into the second half when Australian halfback Will Genia threw a pass to no one which was scooped up by his opposite Mike Phillips who found Jonathan Davies.

The centre toed it ahead twice and beat Rob Simmons to touch down.
But then Harris stepped up to nail the kick and break Welsh hearts. 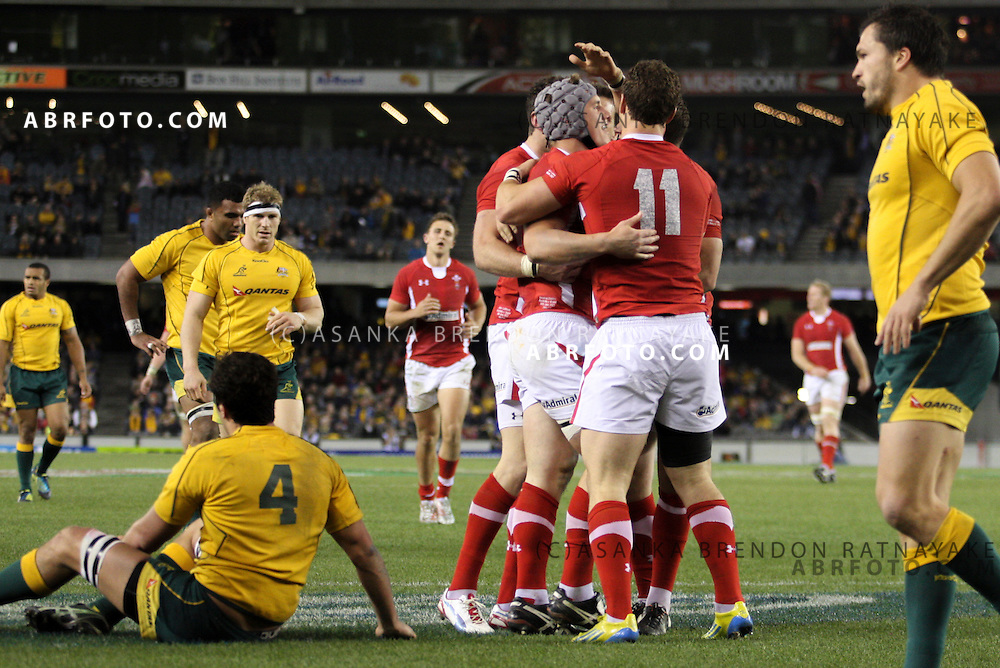